When legends battle, you watch. WWE has recently posted a new video to their YouTube channel, which shows the full match between Brock Lesnar and Goldberg from WrestleMania 33. In the match, Lesnar defeated Goldberg to win the Universal Championship.

The Beast Incarnate disposed of his most persistent foil at WrestleMania, ending Goldberg’s miraculous comeback run to take the Universal Championship off the waist of the iconic Superstar and install The Conqueror at the mountaintop for the first time since 2015.

It didn’t look like it was headed that way at first, though. Lesnar instantly took Goldberg to Suplex City with three Germans, but the champion stood right back up and responded with two huge Spears. When Brock rolled to the outside to escape Goldberg, he was driven through the barricade with a third Spear.

Back in the ring, Brock attempted an F-5, but Goldberg escaped and hit yet another Spear. Goldberg then connected with the Jackhammer — a finishing maneuver that has felled hundreds of men — yet, miraculously, Lesnar kicked out. The Universal Champion was clearly stunned and things were never the same after that.

Goldberg charged for another Spear, but Lesnar leaped clean over him, leaving the Universal Champion to plow headfirst into the ring post. The Beast re-opened the gates of Suplex City and took Goldberg on an all-access tour. He administered not one, not two, not three, not four, not five, but six German Suplexes before capping off the annihilation with an F-5 from which Goldberg could not recover.

This was a fun match, but the story behind it was the best part. Seeing Goldberg’s return to the company for the 4 months leading up to WrestleMania was truly inspirational, and something that I will never forget. 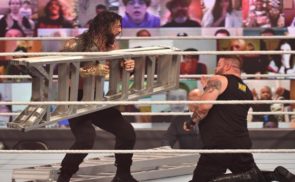