The beginning of the war. WWE has posted a new video to its YouTube channel in which they show the House of Horrors Match from Payback 2017 between Bray Wyatt and Randy Orton.

From the moment Orton was driven up to the House of Horrors, he encountered a series of terrorizing sights. When he dared to approach the house, Orton spotted Wyatt in the window and proceeded to kick the door open. There, The Viper stepped into a dwelling filled with truly unspeakable evil. Among the dark distractions that filled every corner and shadow of the space, The Eater of Worlds appeared from nowhere and unleashed an all-out assault, dismantling both his opponent and the house. Whenever Orton managed to gain an advantage, Wyatt would disappear, then use the interfering horrors of his establishment to regain the advantage.

The first part of this showdown culminated in the House of Horrors’ kitchen, where both Superstars ruthlessly brawled with each other before Wyatt escaped by dropping a refrigerator on his adversary. Making his way outside, The Eater of Worlds mystically turned the entire house from blue to red before taking his leave to finish the match at the SAP Center.

Back at the arena, a war-torn Bray Wyatt came forth, as speculation began to fly of an imminent forfeiture from Orton. But, in the ring, The Viper was there to meet his foe with a chair already in hand. Though Orton was clearly ready to use the No Holds Barred stipulation to its fullest extent, it wasn’t long before he was suddenly attacked, first with a two-on-one assault by Sunil and Samir Singh, and then by Jinder Mahal – who used Orton’s stolen WWE Championship as a weapon. This onslaught allowed Wyatt to pick up the victory with Sister Abigail.

It’s crazy to think that four years after this match, these two were still having a similar angle leading up to WrestleMania 37. I guess this was the precursor to that match, and it was just as good. 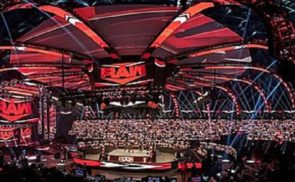