Two of the all-time greatest. WWE has posted a new video to its YouTube channel in which they show the full Last Woman Standing Match for the Smackdown Women’s Championship between Becky Lynch and Charlotte Flair from Evolution 2018.

The Irish Lass Kicker plumbed the hitherto-untested depths of her own sadism to turn the Nassau Coliseum into the ECW Arena, brutalizing her former friend with Kendo sticks and chairs in an effort to keep Charlotte down past the count of 10. Charlotte rose to the occasion (or sunk to Becky’s level, depending on how you look at it), smashing Lynch through a table with a Swanton bomb and threading her legs through a ladder for a torturous variation of the Figure-Eight Leglock.

The longer the match went on, the more it seemed to favor Charlotte, who grew more and more incensed as the minutes tick by. The six-time champion chopped Becky back to the ring when the champ tried to take a walk, rose from underneath a pile of rubble with a red-faced “Is that all you got?!” and tanned Lynch with a Kendo stick as she pursued her around the ring. Becky, visibly running out of tricks, still had one more than her challenger. When Flair set up a table on the outside and laid Becky out for a moonsault, The Irish Lass Kicker instead rose up and powerbombed her opponent through the pine, a maneuver that was narrowly enough to keep her down for the count.

This was another advancement in the advancement of women’s wrestling and boy, did it deliver. It’s no secret that these two will go down as two of the greatest superstars in the history of the industry and everything that they do is special, every single time.

What did you think of the Last Woman Standing Match for the Smackdown Women’s Championship between Becky Lynch and Charlotte Flair from Evolution 2018? Leave us a comment below, or post a comment on our Facebook page! Also, be sure to sign up for our newsletter! 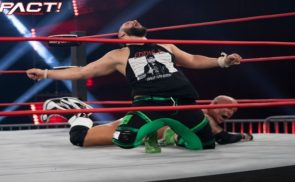 All Out 2020 Live Coverage And Results