In what may be seen as some good news for the company, TNA has announced that three superstars have either re-signed, or have been singed to new deals.

Robbie E, who is a former Television and X Division champion, announced that he has re-signed with the company on Twitter. He has been with TNA since 2010, and is currently in a tag team known as the BroMans, with his partner, Jesse Godderz.

I have a list of goals I still haven’t achieved yet in @impactwrestling … I plan on finishing my list… #bro pic.twitter.com/glnj598xAy

Two new superstars have also signed deals with TNA. Caleb Konley, who has performed in Ring of Honor, as well as other independent circuits will be joining TNA, as announced on Twitter this afternoon by Dixie Carter:

Excited for another addition to the @IMPACTWRESTLING roster! #IMPACTonPop pic.twitter.com/JEWRy82l45

The other superstar that has signed is Sienna. Better known on the independent circuit as Allysin Kay, Sienna has developed quite a reputation; particularly for her work in Absolute Intense Wrestling.

A game changer is coming. pic.twitter.com/kfk87sadz3

I hope that this will be positive for all parties involved. With the recent losses of Bobby Roode, Eric Young, Angelina Love and Velvet Sky, TNA is in desperate need of some new blood to keep any momentum that the company has going in the right direction. 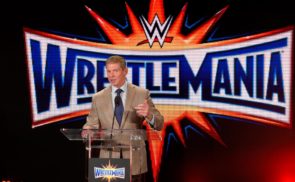 Vince McMahon Very Determined For Brock Lesnar vs. The Rock at Wrestlemania 33