The following are the full spoilers for the second and final night of the 2018 Mae Young Classic tapings that recently took place at Full Sail University:

* Second round match, 20 minute time limit: Toni Storm defeated Hiroyo Matsumoto to advance to the quarterfinals. Lockup to start. Good match. Hiroyo with a diving dropkick for 2. Suplex by Hiroyo for 2. Toni with a snap suplex, a hip attack and a Fisherman suplex for 2. Hiroyo with a modified Boston crab into a single leg, but Toni gets to the ropes. Hiroyo with the headstand knees for 2. Toni with a headbutt and a bridging suplex for 2. Series of near falls for Hiroyo. Toni ducks a lariat and gets a bridging roll up for the 3.

* Second round match, 20 minute time limit: Rhea Ripley defeated Kacy Catanzaro to advance to the quarterfinals. Rhea blows off the handshake. Kacy with a top rope handstand into a head scissors. Rhea overpowers Kacy and takes control of the match. Rhea with a big vertical suplex for 2. Rhea with an inverted cloverleaf, but Kacy flips out of it. Kacy with a tilt-o-whirl DDT. Crowd is firmly behind Kacy. Kacy with a corkscrew plancha to the outside. Kacy with a split over the top into a springboard dropkick but only gets 2. Rhea kicks Kacy out of a headstand and hits a pumphandle sitout bomb for the win.

* Second round match, 20 minute time limit: Lacey Lane defeated Taynara Conti to advance to the quarterfinals. Not much here. Lane reverses Conti’s finisher into a crucifix rollup for the win.

* Second round match, 20 minute time limit: Meiko Satomura defeated Mercedes Martinez to advance to the quarterfinals. Good technical work to start. They trade chops and slaps. Mercedes with a chokebomb for 2. Meiko locks in a Fujiwara armbar and keeps it in as Mercedes rolls over but eventually gets to the ropes. Meiko with a frogsplash for 2. Meiko with a kneeling DDT and a cartwheel knee to the chest for 2. Mercedes with the fisherman suplex but Meiko kicks out. Crowd on their feet. Meiko fights off a surfboard guillotine, and hits a grounded scissor kick for the win. Excellent match.

* Second round match, 20 minute time limit: Io Shirai defeated Zeuxis to advance to the quarterfinals. Zeuxis hits a dropkick to knock Io off the apron. Knees to the face by Zeuxis for 2. Io with a headstand into double knees then running double knees, but Zeuxis holds the ropes so Io can’t get her in position for the moonsault. Io fights off the Spanish Fly attempt and hits a Frankensteiner. Io picks up the win with the moonsault.

* Ricochet is shown at ringside.

* Second round match, 20 minute time limit: Deonna Purrazzo defeated Xia Li to advance to the quarterfinals. Xia with a legdrop and elbow for 2. Deonna with some vicious arm work and gets a 2. Xia rolls up Deonna out of the Fujiwara arm bar but gets only a 2. Xia with a headkick for 2. Deonna catches Xia off the top and locks in a double-arm Fujiwara arm bar for the win.

* Second round match, 20 minute time limit: Tegan Nox defeated Nicole Matthews to advance to the quarterfinals. Nicole cuts off Tegan’s attempt at a tope with a stiff forearm. Nicole with kicks and takes control. Tegan fights back with a headbutt, a crazy modified cannonball in the corner, and the Shining Wizard for the win.

* Second round match, 20 minute time limit: Mia Yim defeated Kaitlyn to advance to the quarterfinals. Kaitlyn with a series of leg drops for 2. Kaitlyn misses a baseball slide and Mia slams her leg into the apron. Mia with a standing Figure Four. Mia with brutal forearms on the ground. Mia misses a punch and hits the mat. Kaitlyn hits a diving shoulder tackle. Kaitlyn with a spinning side slam for 2. Mia sidesteps Kaitlyn in the corner and hits Eat Defeat, but only gets 2. Kaitlyn hits the spear, but also only gets 2. Mia with a kneebar for the win. Crowd was super into this at the end. 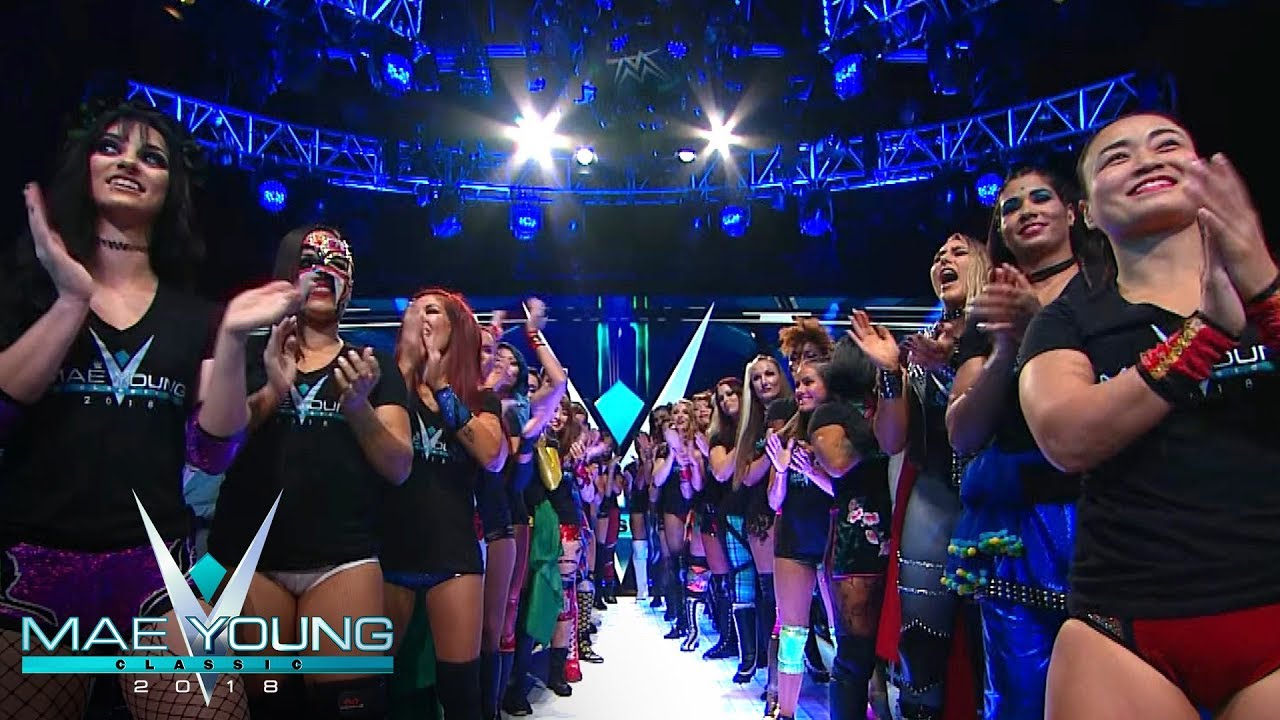 * This episode starts with Michael Cole introducing the quarterfinalists and their matches just like the second round did.

* Quarterfinals match, 25 minute time limit: Meiko Satomura defeated Lacey Lane to advance to the semifinals. Very even start as both duck kicks and punches from the other. Meiko with a stepover spin kick into an armbar. Lacey gets to the ropes. Lacey with a flurry of kicks and forearms, and a crossbody for 2. Meiko with a fireman’s carry DVD style move for the win. Meiko concedes the ring to Lacey for a curtain call after the match.

* Quarterfinals match, 25 minute time limit: Io Shirai defeated Deonna Purrazzo to advance to the semifinals. Io hits a big tope crossbody to the outside. Handstand knees to the midsection for 2 by Io. They trade 2 counts and Io hits a standing double stomp. Deonna with a handspring dropkick. Deonna locks in the Fujiwara arm bar but Io rolls it over for a 2. Io with crossface, but Deonna does the same. Io with a 619 and a diving dropkick for 2. Deonna with the Triple Germans for 2 and then goes for the Fujiwara. Io rolls out to a 2 count and again into a crossface. Deonna rolls out but gets a knee to the face. Io with the running double knees and a moonsault for the win.

* Quarterfinals match, 25 minute time limit: Toni Storm defeated Mia Yim to advance to the semifinals. Toni with a suplex for 2. Mia locks in a headlock on the ground, but Toni powers out. Toni flips out of an over-the-legs stretch for a 2. Mia locks in a guillotine with a body scissors, but Toni powers out into a slam. They trade strikes from the ground to a standing position. Toni with a hip attack, but Mia hits a side suplex for 2. Mia with a powerbomb for 2. This is awesome chants. Toni blocks Eat Defeat and hits a snap suplex and her double underhook bomb for the win. Great match. Full Sail erupts in “please sign Mia” chants after the match.

* Quarterfinals match, 25 minute time limit: Rhea Ripley defeated Tegan Nox to advance to the semifinals. Tegan hits a dive to start and lands rough and appears to have injured her left knee. The ref throws up the X and the doctors come to check on her. Tegan wants to continue. They continue, but after Rhea hits a dropkick, Tegan screams and throws up the X herself and the ref calls for the bell. Tegan is sobbing in the ring and Full Sail is silent. Rhea is announced as the winner as they tend to Tegan. Tegan is helped out to a standing ovation. Absolutely heartbreaking situation.

* Triple H comes out and is greeted with “Please Sign Mia” chants, to which he responds “okay,” and says that’s it, we’re not bossing him around anymore. Cuts a promo about how great everyone has worked in this tournament and the sacrifices they leave in the ring for the fans. Says Tegan Nox got carried out of here, not with a broken knee, but a broken heart and he promises that is only a bump in the road for her. Runs down the semis and asks if we’re ready.

* Semifinals match, 30 minute time limit: Toni Storm defeated Meiko Satomura to advance to the finals. Toni with a huge boot to the face. Toni with a suplex for 2. Meiko takes over with some stiff kicks. Modified Figure Four but Toni gets to the ropes. More kicks from Meiko. Toni fights off a side suplex, but Meiko hits a spin kick off the ropes. Backslide by Toni for 2. Toni locks in an STF, but Meiko gets to the ropes. Toni with a suicide dive to the outside. Shining Wizard for 2 by Toni. Toni hits her double underhook bomb but only gets 2. Incredible sequence of nearfalls for Meiko. Crowd is on their feet. Toni lands the double underhook bomb one more time for the pin. Incredible match. Kairi Sane out to present flowers to Toni Storm. Triple H meets Meiko on the stage and raises her hand. Toni is asked how she feels. Toni says she beat a legend and is living her dream. Thanks all the girls in the back and the fans. Triple H meets her on stage and raises her arm.

* Semifinals match, 30 minute time limit: Io Shirai defeated Rhea Ripley to advance to the finals. Rhea gets booed coming out, and is really in an unenviable position as it appears Tegan was supposed to win their match before the injury occurred. Rhea takes control early. Io tries to fight back but gets nailed with forearms. Rhea locks in a body scissors. Io leans back a few times for 2 counts, but Rhea doesn’t let go. Rhea with a 10+ second delayed vertical suplex for 2. Interesting note, Michael Cole is calling the match standing up so he can see the ring, likely because they have no notes for this match since it wasn’t planned. Io fights back with forearms. Io with a suicide dive crossbody. Io climbs back in, but Rhea pulls her out of the ring. Io gets in at 9. Rhea attacks with punches to the back. Io slaps Rhea, hits the 619 and a diving dropkick for 2. Rhea hits a superplex but only gets 2. Io pushes Rhea into the post, hits the double knees and the moonsault for the win.

Kairi out with flowers and her and Io share an emotional hug. Io says thank you and declares she will win. Triple H and Sara Amato meet her on stage to raise her hand, and Toni Storm is out. They hug and pose for photos with Triple H and Amato to end the tapings. 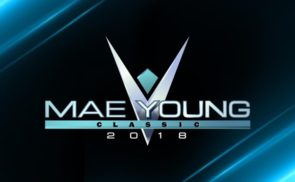 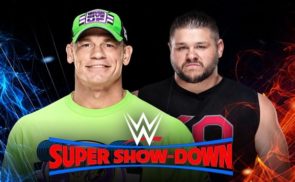 John Cena vs. Kevin Owens Confirmed For Super-Show Down