WWE Universal Champion Roman Reigns was a guest on ESPN’s “First Take” this morning, where he discussed a number of topics. Among them were his thoughts on the NFL, playing college football for Georgia Tech, and his match with Braun Strowman on the season premiere of Smackdown this Friday.

You can see his appearance in the video below:

The interview began with Domonique Foxworth and Reigns comparing their times of playing college football against each other. Foxworth played for Maryland, while The Big Dog was a Defensive Tackle at Georgia Tech. They then switched gears and talked about the NFL, where it was discovered that Reigns was a fan of the San Francisco 49ers. Although he hasn’t kept up with the team as of late, he is a fan of Jimmy Garoppolo, despite the fact that he was benched for the second half of last week’s game against the Dolphins due to an injury/poor performance.

When asked who he would lose more sleep over, Lamar Jackson or Patrick Mahomes, he said both. He said while Jackson is a great running quarterback, there was something about Mahomes’ footwork and ability to get the ball down the field instantly that was difficult for him as a defensive player.

Max Kellerman then asked Reigns which current NFL player would best make the transition to the WWE if they were interested. The Tribal Chief said that Los Angeles Rams defensive tackle Aaron Donald would do a good job with this, as he is a good athlete who just needs to be taught how to come out of his shell and brag about his abilities.

Finally, Reigns promoted his match with Strowman this Friday night on Smackdown. He said that he hopes that his cousin, Jey Uso is watching, as they will be colliding at Hell in a Cell later this month. He would conclude by saying that he is going to “whoop Strowman’s ass” this coming Friday. 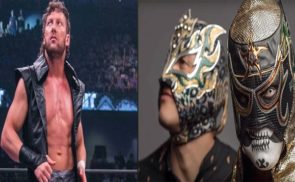