Ric Flair is Proud of WWE for Hosting WrestleMania 36

WWE Hall of Famer Ric Flair was recently interviewed by Mike Greenberg on ESPN’s “Get Up,” where he discussed the upcoming WrestleMania 36 show and the company’s decision to host it, despite the Coronavirus pandemic.

You can see the entire interview below:

Flair said that he is proud of WWE for taping the show and for going on it. He said that it is important that people have live events to look forward to because there is nothing but replays on sports networks right now. He said that it will give people a reason to laugh and smile about during this difficult time.

With regards to there being no audience for the shows, The Nature Boy said that Kevin Dunn and Vince McMahon will make it seem like there are people there. This will be done through video packages and production techniques, and the athletes will perform as if there was a stadium full of people. He also said that on Monday morning, the sports shows will be talking about WrestleMania and not Tom Brady, The Buccaneers or Tua Tugavailoa.

They talked about Rob Gronkowski being the special host of WrestleMania 36. Flair said that Gronk is phenomenal and sent him a text saying that he was so. He said that cross-promotion between sports and wrestling is huge, and many people are looking forward to seeing him on the show. He also said that while all people around the world may not understand several of the major sports (football, soccer, etc.), everyone around the world understands wrestling.

Before leaving, Flair was asked about the emotions that he is feeling during the Coronavirus pandemic. He said that he lives day to day because nothing is guaranteed. Wrestling has been the one constant throughout his life and he plans to dress up and walk the red carpet in his house for the show this weekend! 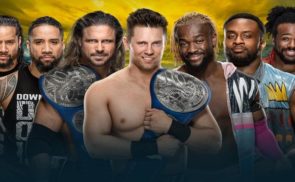