Let the chaos begin. It had been previously reported that WWE’s newest faction had a name and that they would be known as RETRIBUTION. The group teased their appearances on Raw this past week, causing technical difficulties throughout the show and throwing a Molotov Cocktail at a power generator.

However, the chaos didn’t stop there.

This week on Smackdown, RETRIBUTION made their official debut with the company in the closing moments of the show. The group would proceed to destroy the ringside area, as well as attack the Performance Center developmental talent that has been watching the show over the past few months. You can see a clip of their appearance below:

The chaos would only escalate as the lights were cut, and RETRIBUTION made their way toward the ring armed with baseball bats and other weapons. The mysterious new faction would spray paint the WWE Performance Center and conclude their destruction by removing the ropes from the ring with a chainsaw. RETRIBUTION is here to stay, but what exactly is motivating this masked group of marauders.

This group’s debut reminded me of an awkward mix of The Nexus, Aces & Eights and the nWo. However, I must admit that I am intrigued by where this is going. It’s something new, fresh and could lead to a fascinating storyline going into the fall. I also like how the group appears to be diverse in a number of ways and will be unleashing their fury on both male and female competitors. I’m not sure where this is going to go in the coming weeks, but I look forward to seeing the direction that it takes. 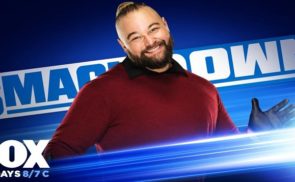