Opinion: This Is Tony Khan & AEW’s Sink Or Swim Moment

It has not been a good week for All Elite Wrestling. Coming out of their recent Double or Nothing pay-per-view, many questions were raised about AEW and their business practices and how things were handled behind the scenes by Tony Khan. With all the controversy surrounding MJF and now with the confusion about their world championship, one thing is evident to me.

In my opinion, this is a sink or swim moment for Tony Khan and the future of AEW.

Allow me to be very clear and transparent: I am unabashedly and openly not a fan of AEW and haven’t been since the beginning. I believe that Khan has no idea how to run a wrestling company, does not understand the business aspect of it, and his product is nothing but spot fests, blood and deathmatch type matches, and trying to get their small fan base to mark out for every little thing that they do. They have NO IDEA how to tell a story, except for a couple of performers (MJF, CM Punk).

As a result, some of my opinions may seem biased. However, even the diehard fans have to see that their company is in trouble.

Let’s begin with MJF. Obviously, the big news coming out of the weekend was how unhappy he was with his contract situation and how he no-showed a meet and greet. There were even rumors that he had booked a flight home for himself and would not show at the pay-per-view. I didn’t believe that would be the case, as everything I’ve heard about MJF is that he is a professional and will honor the commitments to which he is contractually obligated.

Now let’s go to his promo on Dynamite this past week. You can find it all over YouTube, but here is one version (uncensored):

I think we can all agree that this is one of the best promos in the last 10 years. Also, I completely believe that this whole thing is mostly a work, at least from MJF’s point of view, and that we are all being played.

But I ask you, what did he say in his promo that was wrong?

On many platforms, including here on Wrestling Rumors and The Hoots Podcast, I’ve said that AEW does not care about building its own stars. Instead, they try to rest on the laurels of superstars who were fired from other promotions and want a hefty paycheck that Tony Khan is willing to pay.

I hate to break it to everyone, but the honeymoon period of AEW is over. Their gimmick of oversaturating their roster with ex-WWE talent has run its course, and they are at the point where they have to start building and developing their core roster. Unfortunately, there isn’t enough TV time for everybody because of how extensive their roster is, so this company can’t tell a consistent storyline on weekly television.

Up to this point, the company has been able to survive because people who will cheer anybody but WWE have poured a ton of money into this company to keep it afloat. But what are they doing to attract new fans?

Also, I looked at a lot of Twitter after the double or nothing pay-per-view, and even the AEW diehard fans were saying that it was not a good look for the company.

Now, let’s go back to the promo. As I mentioned before, I do believe that a lot of this is a work and that MJF is doing an excellent job of getting people talking about him. At this point, he has established himself as one of the top superstars on the planet. And that is undoubtedly good for AEW.

However, I very much believe that this is going to backfire. My guess is that Tony Khan felt that he should run with what the Internet is saying since that’s pretty much how he books his television show every week. And while that actually makes sense, to take something real life and turn it into a storyline, the problem is that the diehard fans will start to realize that MJF was right about everything he said.

And if we know anything about wrestling fans, they will quickly turn on the product if they don’t like it. However, AEW’s superstars are still going to expect to get paid. But where will that money come from if they aren’t attracting new fans and the fans that have stopped pouring money into the machine?

In a sad set of circumstances, CM Punk, their new world champion, announced that he has to have surgery and cannot defend his championship. This makes me very sad, as even though I have not been a Punk fan for quite a while, you cannot ignore the incredible reaction he gets from the crowd. And to see him very happy doing what he loves is something that many fans can get behind. I certainly wish him a speedy recovery and hope that we see him back on television very soon. 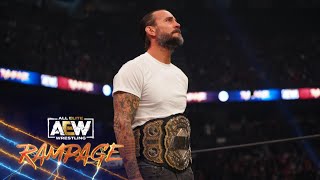 AEW has had a chance to capitalize on this unfortunate circumstance and do something great. And boy, have they dropped the ball.

They announced that John Moxley would immediately be named the number one contender. And that a battle royale would determine who would face him at the upcoming Forbidden Door pay-per-view to be crowned the new world champion.

What exactly has Moxley done to deserve to be named the number one contender automatically? On June 1, he was no. 4, and now he has magically shot up to no. 1 after losing at Double or Nothing.

AEW has just proven that their ranking system is completely irrelevant and doesn’t matter.

They have a golden opportunity to get MJF into the world championship picture if they can get everything worked out. However, I can’t see that happening at all. I hope I’m wrong, but I don’t have faith.

While I am not a fan of All Elite Wrestling, I hope it is a successful company. Competition is good on all fronts, and it makes everything better. Plus, as somebody who loves professional wrestling, I want to see many people put on a fantastic product and for all of the talent to make as much money as possible.

However, we will find out if Tony Khan belongs in the wrestling business with all of the negativity this week and how he handles both the MJF situation and their world title picture. If he can navigate these waters and the company continues to thrive, then he absolutely deserves a seat at the table, and I will admit that I was wrong.

Time will tell. But time is not on his side.

Main Event For Clash At The Castle Appears To Be Set