The 2022 Royal Rumble has come and gone, and with it, a number of people who are unhappy about how the event transpired. While some are complaining about the in-ring competition, the majority of the griping has to do with the booking of the show and how things didn’t go down as they thought that they should.

This is where I come in.

This article is the first of what I guarantee will be many in a series during my time at Wrestling Rumors. This new segment is called: Everyone, Just Relax.

Side note, you can find the audio version of this article on The Hoots Podcast, of which new episodes are released every Thursday. 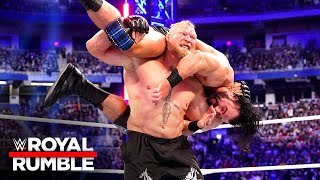 After this year’s Royal Rumble, naturally, Twitter exploded with messaging saying that “this was the worst show ever” and that “AEW is going to buy WWE in a few years”. However, if you just take a step back and think about things for a minute, you will realize that there is some long-term storytelling going on here that will play itself out on the road to WrestleMania. I acknowledge that certain things didn’t go I thought they should have either, but it wasn’t egregious enough to feel the need to burn down Titan Towers.

Let’s break down where the most controversy is and I will explain to the Internet Wrestling Community why it needs to just calm down just a little bit:

Result: Seth Rollins wins by disqualification after Roman Reigns chokes him out and won’t let go, despite the fact that Rollins has his hand on the ropes. Reigns then proceed to beat the holy hell out of him with a chair.

Why everyone needs to relax: This was the perfect way to end this match. Not only does it keep Rollins in the title picture through WrestleMania, but Reigns also gets revenge for ‘The Architect’ breaking up The Shield 8 years ago. The fact that Rollins came out in riot gear to The Shield’s old music was an awesome touch as well.

Result: Ronda Rousey makes her return at No. 28 and goes on to win the match.

Why everyone needs to relax: Of the two Royal Rumble matches, I thought that this was most entertaining. Some great and fun returns, good setting up of storylines going into WrestleMania season, and the return of one of the most outstanding competitors in the women’s division in the last 10 years.

Also, seeing Mickie James come out to her ‘Hardcore Country’ song with the Impact Knockouts’ Championship was one of the most historic moments in WWE history.

Why everyone needs to relax: I feel like this match was in a tough spot, because of both the fire that burned the WrestleMania logo, as well as this match following the Women’s Royal Rumble match. Although we all knew that Lynch was going to retain, Doudrop looked great, which I hope will set her up to have a stellar 2022. She’s earned the opportunity to have the spotlight. 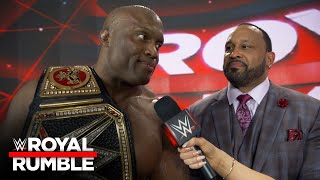 Result: After a referee bump, Roman Reigns returns and spears Brock Lesnar. Paul Heyman assists in this process, turning on Lesnar, and allowing Bobby Lashley to win back the WWE Championship.

Why everyone needs to relax: We all knew that it was going to be Reigns vs. Lesnar at WrestleMania 38. So, why is anybody surprised at this result? Also, who is to say that Heyman turning on Lesnar wasn’t the beginning of a double turn that takes place at WrestleMania?? Lashley held his own against Lesnar and now the door is wide open for who will challenge him for the WWE Championship at Wrestlemania.

The Miz and Maryse vs. Edge and Beth Phoenix:

Result: Edge and Beth Phoenix get the win.

Why everyone needs to relax: Not much to say here. This match was fun and a neat way to bring Beth Phoenix back into action one more time.

Result: Brock Lesnar enters the match at No. 30 and goes on to get the win.

Why everyone needs to relax: This is where most of the controversy is. Now, I will be the first to admit that this is not how I would have booked the ending of this match. Lesnar didn’t need the Royal Rumble win to get to Reigns at WrestleMania; that could have been an easy story to tell over the coming weeks leading up to the big show. I would have much rather seen someone like Big E or Damian Priest get the win, so I understand that side of it and why people are upset.

Also, I wish there would have been more returns, like in the Women’s match. Only Bad Bunny and Shane McMahon were the surprises, outside of Lesnar, which made the match a bit boring, in my opinion.

However, how can you argue with the storytelling here?

Lesnar gets screwed, comes back in the Rumble match, gets the victory, and now has the opportunity to upstage the guy that screwed him on the grandest stage of them all. Reigns/Lesnar/Heyman has been the best story in professional wrestling for the past 6 months and every time they are on television together it is pure gold. Why wouldn’t we want to see that one more time at WrestleMania? It will be the culmination of a story that began when Heyman allied himself with Reigns back in the ThunderDome era and involves the two best characters in wrestling in the world.

Also, Lesnar and Reigns have been the two best for about 6 or 7 years now. So, it’s only fitting that they finally get the chance to go at each other in a lengthy program.

While it wasn’t perfect, this was a great way to set things up on the road to WrestleMania. However, because it isn’t what the IWC wants, it must have been a complete disaster.

As with all things in professional wrestling, there is an immediate and gut reaction to how bad something is. But, give it time. Let the story play out to the end. Things always seem to work out and at the end of the story, almost everyone is happy.

In other words…just relax. 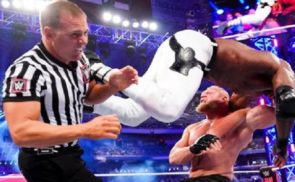 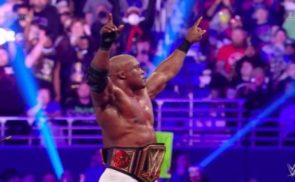