One of the most intense feuds over the past few months has been between Bayley and Sasha Banks. Ever since Bayley turned on her “best friend” a few weeks ago on Smackdown, a rivalry which has been anticipated for over a year is finally coming to fruition.

Bayley is the current Smackdown Women’s Champion and her match with Banks will most likely be for that title. However, I have a different take on this and feel that WWE should go in a different direction.

In my opinion, Bayley vs. Sasha Banks should NOT be for a title of any kind.

The theory behind this is quite simple: this feud doesn’t need a title. And quite honestly, I think it will mean more if there is no championship involved.

We all know that in today’s world of professional wrestling, titles are, for the most part, used as props to get certain wrestlers over. While this is especially true with the mid-card titles, you could make the case that for certain superstars, even the company’s main titles are used only as a way to give them more television time and to make their matches seem more important than they actually are.

This is not the case for Banks and Bayley.

This feud has become so personal that you don’t need a title to add an additional layer to it. There is enough backstory between the two competitors, with their coming up together in NXT, their wonderful matches both in developmental and on the main roster and the detailed and storied history between the two over the years, that you don’t need to add anything else to this feud.

In addition, this would free up the Smackdown Women’s Championship to be used to get other superstars over or give them more television time. The first thought that comes to mind is Alexa Bliss and Nikki Cross since Cross was going to be getting the opportunity against Bayley at Clash of Champions anyway.

Now, some will argue that you could make the same argument for Cross and Bliss since they were friends and apparently may be going their separate ways. However, we don’t know where the feud is going yet, as Bliss’ possession angle hasn’t fully been realized yet.

On another topic, Alexa Bliss being possessed by The Fiend is one of the best storylines in WWE right now. But that’s another topic for another time.

The bottom line is that the eventual grudge match between Bayley and Sasha Banks will mean a lot more if there are no championships involved. Let these two competitors, who have absolute disdain for one another, beat the holy hell out of each other at whatever pay-per-view they choose to do it at and all of us will be able to soak in the greatness of what these two bring to the table. 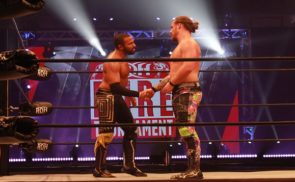