Every week, I try. I try really hard to watch AEW and view it as the No. 2 wrestling promotion in the world, giving it a chance. And every week, there are some bright moments, with good matches and characters that have tremendous potential. That makes me very happy.

However, for the most part, I am very disappointed and flat-out angry with what I see each week on TNT. Stupid gimmicks, inconsistent storylines, a lack of consistency in the presentation of a television show, and matches whose sole purpose is to maim and mangle your opponent flood my television screen every week. Finally, after watching tonight’s absolute garbage episode of Dynamite and thinking about what I have seen over the past year or so, I finally had a revelation.

In my opinion, Tony Khan, and all of the executives of AEW have one objective: to make a complete mockery of the wrestling business and create a parody of the professional wrestling industry.

Let’s take tonight’s episode of Dynamite, for example. The show began with The Elite, who are supposed to be the EVP’s of the company, come out in basketball uniforms and hype music as if they are being introduced at an NBA game. During their match with The Dark Order, they decided to take a break to try and dunk a basketball instead of present a professional wrestling product.

Normally, I wouldn’t have a problem with them doing silly things as WWE does it all of the time. We’ve seen “Symphony of Destruction” matches, weird street fights, etc. However, AEW markets and presents itself as an alternative to WWE and takes shots at them all of the time for similar tactics.

Yet, they run their promotion the exact same way, consistently taking shots at the juggernaut that is World Wrestling Entertainment, using talent that WWE doesn’t want anymore, and claiming that they are different. WWE will ALWAYS live rent-free in AEW’s head. 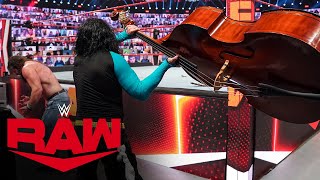 The basketball stunt is a long line of terrible gimmicks, stupid characters, and non-existent storylines that are presented each week on a major cable network television program. And what is the biggest problem with all of it?

It seems to me that EVERYONE in the company does whatever the hell they want with their characters and no one in leadership really cares what happens with the development of a storyline. That’s why so many of these cringe-worthy characters have prominent roles on television. Because these wrestlers, who only have credibility because they made a name for themselves in other promotions, come to AEW and play these characters that they’ve always wanted to, and get overpaid to do so, regardless of how it comes across on television.

That’s what happens when you have a wrestling mark with a giant bank account purchase a wrestling promotion. Tony Khan has no clue on how to run a wrestling promotion, or how the business is structured. AEW markets itself to a very small part of the entire wrestling fanbase and allows the Internet Wrestling Community and Twitter to dictate their booking and character development. 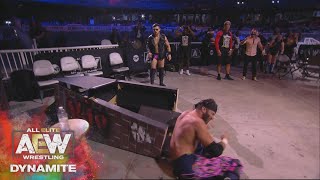 Now let’s talk about the other biggest mockery of professional wrestling that AEW prides itself on: The Deathmatch.

Full Disclaimer: I am not a fan of the Deathmatch style and it doesn’t do it for me. Therefore, my opinion on this might be a little bit biased.

AEW has had several Deathmatch-style wrestling matches on its program, and that in itself is a complete mockery of professional wrestling. This style is being shown on cable television and is easily seen by people who are easily influenced to try this stuff at home. However, AEW & TNT puts no disclaimers on its program that viewer discretion should be advised, or any of that, as they do with their movies that they show on the network occasionally.

The Deathmatch in itself is a mockery of pro wrestling and is an embarrassment to the sport. It is the complete opposite of what wrestling should be: telling stories, developing characters, and undertaking outstanding athletic contests. Instead, the Deathmatch involves wrestlers unnecessarily putting their lives on the line, hitting themselves with weapons and items that could cause serious and permanent damage to their bodies. Hell, dying is a part of the title of the match style.

If you want to watch a Deathmatch, there is a special channel for that – it’s called pay-per-view. Under no circumstances, should something like Chris Jericho vs. Nick Gage be shown on cable television. The executives at Turner who allowed this to be aired should be fired for incompetence and AEW should be embarrassed that they approve of this nonsense.

Tune in to the MAIN EVENT #AEWDynamite #FightForTheFallen LIVE on @tntdrama! pic.twitter.com/5ipTdwPNIL

Stupid gimmicks, inconsistent storylines, a lack of consistency in the presentation of a television show, and matches whose sole purpose is to maim and mangle your opponent. Sounds like a parody of professional wrestling to me. And if that’s what AEW wants to be, then they should market themselves as such.

But don’t try to be something that you’re not; in AEW’s case, that is a legitimate wrestling company. 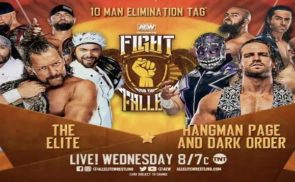