NXT Champion Finn Balor was recently interviewed by Bleacher Report ahead of his title defense against Pete Dunne this weekend at “NXT Takeover: Vengeance Day”. He discussed a number of topics, including his time in NXT, a potential match for him at WrestleMania 37, the past and present of Bullet Club, and more.

On his return to NXT and facing Pete Dunne:

“I think with anything, with Pete, we probably bear the most similarities to each other compared to all of the opponents I’ve faced in this second run in NXT. He’s someone who has definitely been on the rise the last couple of years, and I’m well aware of his abilities inside the ring. For me, it’s going to pose a big challenge and I’m excited about it.”

On possibly facing Edge at WrestleMania 37:

“I feel, and rightfully so, a lot of justification and thanks for a lot of the hard work NXT has done over the last couple of years,” he said. “We’ve been building the brand, and it’s really grown into a third individual brand of WWE.

“I think all the titles should be held at the same level. That’s definitely the way Edge sees it, and I think that’s the way a lot of people see it. I have no doubt one day the NXT title will be defended at WrestleMania.”

“[He’s] one of the people I really admire for how gracefully he transitioned out of WWE and moved on to that next step of his life,” Balor said. “We had spoken about that in-depth many times, so to see him back now is very, very surreal. I never even entertained the possibility of us working together with his situation.

“For me, it’s very exciting. Obviously, I’ve gotten to be in the ring with all of the top guys in WWE, and Edge is the one I have not been in the ring with, so that’s a box I want to check. And if we can do it at WrestleMania, all the better.” 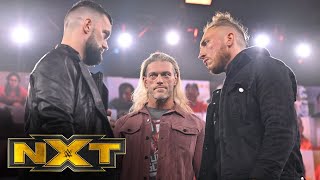 On the past and present of Bullet Club:

“I think it’s something that’s really stood the test of time, and it’s a credit to not only the original generation of myself, Gallows, Anderson, Tama [Tonga] and [Bad Luck] Fale but also the guys who came in after us whether it was Adam Cole, Kenny Omega and AJ [Styles],” he said.

“It’s something I feel that’s grown and transitioned, and people have gotten attached to it and bonded to it. It’s something that’s developed over the years in different forms. It’s really cool to see how it’s going right now.”

“I know there’s a lot of cross-brand work going on, which is something I’ve been an advocate for years,” he said. “I don’t feel like we should be limited to what our contract says or what company we work for. I feel like wrestling, on the whole, can be better if we all worked together, so if that means me going to Japan or me going to Europe, or me going to Mexico, I’m down to do that.

“I’m all for the open-border policy, not just between countries but companies as well.”

They also discuss becoming injured after being the first Universal Champion, his dream matches, and more. 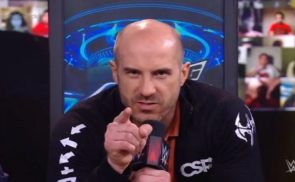