The biggest news story of the day, by far, has been the sudden release of Bray Wyatt by WWE earlier today. But what is the reason for his departure from the company?

According to a report from F4WOnline, Wyatt was told by John Laurinaitis that his release was due to budget cuts and not something that he had done. He was, in fact, preparing to return in August to a Monday Night Raw show on August 9.

PWInsider is reporting that the reaction within the company was one of complete disbelief at the news. Wyatt’s licensing has been huge in recent years, with The Fiend had been a massive hit for both t-shirts and action figures.

One idea being tossed around is that WWE President Nick Khan and CFO Kristina Salen are so “obsessed” with the company not being even red on the financial ledgers, that even after the most recent financial quarter, there had to have been a push to cut costs. It had also been noted that Wyatt’s relationship with Vince McMahon’s was very “hot and cold” at times.

The Fiend had some incredible moments over the years: 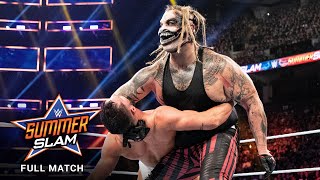 I am floored by this one. I’ve always believed that The Fiend would go down as the greatest character of this generation as I thought it was so unique and captivating. Not only is he incredibly entertaining and fantastic in his promos, he is wonderful in the ring and moves with great agility for someone his size. I hope that this is not a goodbye, but simply a “see you later” and that we see The Fiend back in WWE sooner rather than later!