After a heel turn in September for the first time in her WWE career, Bayley was able to regain the SmackDown Women’s Championship from Charlotte Flair, commencing her second title reign. Since then, Bayley has been champion for five months, and holds the longest reign in the history of the championship. Since her second title reign, Bayley has went through the gamut of women’s wrestlers, dominating the division.

Bayley has been able to rack up wins over the past few months against names such as Nikki Cross, Dana Brooke, Lacey Evans, Carmella, and most recently – at Super ShowDown – Naomi. With an impressive list of wins, there looks to be no one else who could compete against her. Or, is there?

The official WWE India Twitter page created a post of who Sasha Banks should compete against at WrestleMania 36. While names such as Bianca Belair, Io Shirai, and even Lita and Trish Stratus were mentioned, the majority of fans want a match against Bayley.

On the latest episode of SmackDown, Bayley and Sasha Banks was able to defeat Naomi and Lacey Evans. Following the match, the camera showed a backstage conversation of the winner congratulate each other. During this conversation, Bayley stated that there is no one who can defeat her for the title.

Seemingly, this is a setup for a match between the two at WrestleMania. While there is certainly a story that could easily be developed in a short amount of time, the confusion lies in who will make the babyface turn before the match. While Bayley’s heel turn has not been very successful reaction-wise, it has created a dominant title reigns.

Similarly, Sasha’s heel turn is something that many felt was overdue, since her booking as a babyface had become stale. However, her heel run has recently been overshadowed by Bayley’s current run as a heel. This could very well be the reason why WWE decides to turn her babyface again. 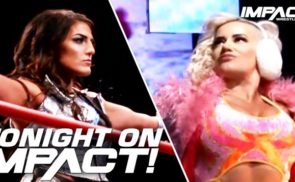