Since winning the WWE Championship on the debut episode of Friday Night SmackDown against Kofi Kingston, Brock Lesnar was heavily involved in a feud with Rey Mysterio, which also included former UFC Heavyweight Champion Cain Velasquez, and even Rey’s son Dominik. Lesnar was able to gain retribution for his 2010 UFC loss by tapping Velasquez out at Crown Jewel, as well as pinning Mysterio at Survivor Series.

As a result, Lesnar does not have a top contender for his WWE Championship, and the Royal Rumble pay-per-view is just a few weeks away. However, this may change.

Drew McIntyre was interviewed by 100.7 The Bay to promote an upcoming appearance during WWE’s Holiday Tour. McIntyre told Joanna Campbell that he has his eyes set on Lesnar.

“I’m going to keep kicking people’s heads off, until I get my first ever world title shot, currently held by Brock Lesnar. He doesn’t like to show up to work very often, so I may have to wait a while, or I might have to show up on his farm to actually get my title shot. But, that’s my goal right now.”

“I don’t blame Brock,” said McIntyre. “To be fair, if you’re gonna get the kind of offer he’s got, then you’d be silly not to take it.” He does admit to agree with the critique of Lesnar rarely appearing, though, because he wants a shot at the title.

Regarding an opportunity to face Lesnar for the WWE Championship, McIntyre stated, “all I need is one shot, and I’ll kick his d**n head off and take that title.”

Please credit Chris Featherstone of Wrestling Rumors for any quotes used in this article. 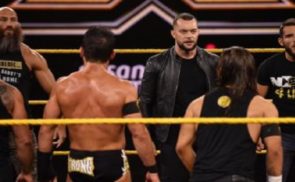 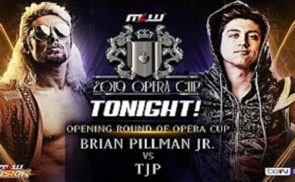