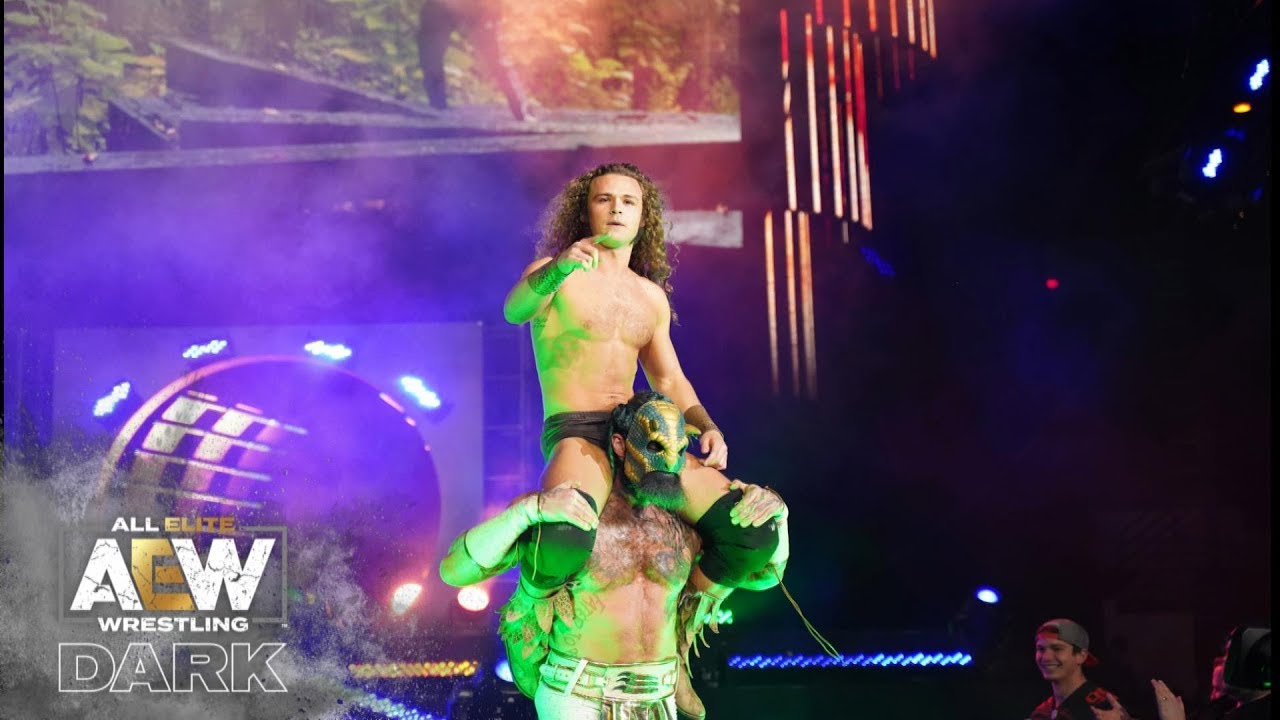 This show has gone in a very different direction over the last few weeks as they have been averaging about half an hour. I’m not sure what that means for the future but it’s been rather nice just getting in and getting out. Granted the show hasn’t been around long enough to exactly have a history or lineage so it could be completely different this time. Let’s get to it.

Tony welcomes us to the show and talks about the Rock and Roll Hall of Fame. He’s rather glad that KISS finally got in….six years ago.

Marko Stunt/Jungle Boy for the Express here. Stunt and Cutler start things off as we hear about Stunt being exactly a foot shorter than Cutler. Some rollups give Stunt two and it’s off to Jungle Boy, who ducks underneath a moonsault out of the corner. A multiple springboard armdrag puts Cutler down and it’s off to Kiss for the splits armdrag. Jungle Boy gets laid over the middle rope and Kiss flips forward into a kick to the ribs. This of course means dancing, which is a theme for this match.

Boy beats up both of them at once and launches Stunt onto him in a flipping splash. Cutler is right back to run Stunt over and a swinging slam gives Cutler two. A hurricanrana finally gets Stunt over to the corner though and it’s Boy coming in to clean house. Something like a Last Chancery (with Cutler on his knees instead of on his stomach) has Cutler in trouble but Kiss makes the save. That earns Kiss a trip to the floor and Boy puts Cutler in a Gory Stretch. Stunt comes off the top with a flipping Stunner for the pin at 7:28.

We go to therapy with Brandi Rhodes. She knows something isn’t right and has visions of the therapist wearing her own clothes. Brandi needs to let go of the people she hates.

Awesome Kong and Dr. Luther are here with Mel. Shida gets jumped at the bell and Mel tosses her around with ease. Mel forearms her down into the corner for two and we hit the chinlock. Make that a dragon sleeper as Shida is bent backwards rather hard. Back up and Shida sends her outside for the running knee off the chair…to Luther for some reason.

Back in and Mel hits an enziguri to drop Mel, followed by a snap suplex for two. Mel kicks her down and drops a leg for her own near fall. A few shots to the face are shrugged off and Shida hits a running knee to the face for two more. Luther offers a distraction so Kong can interfere, only to hit Mel with the kendo stick by mistake. Another running knee finishes Mel at 8:16.

Post match Shida leaves so Kong yells at Mel, who fights back. She and Mel double team Kong and send her through the barricade. A legdrop off the steps leaves Kong down.

From the Jericho cruise.

She and Omega are in matching pink and white because they’re long term partners.  As a bonus, there’s no commentary here and it’s shot indy style with a handheld camera. Ford slaps Omega to start and they lock up as the fans chant for AEW while declaring this wrestling. An exchange of headlocks lets Ford take him down, only to have Omega reverse into a headscissors.

Sabian comes in and says he wants Riho, who works on her own wristlock. That earns her a forearm to the back but she hits a running dropkick and armdrag. Sabian slams her a few times but Riho slips out of a third and brings in Omega to clean house. A running powerslam gives Omega two and it’s Riho coming in for a double stomp and half crab. Back up and Sabian sends them into the corner together but Omega comes out with the jumping Fameasser for two.

It’s back to Riho for some chops in the corner but he takes her over to Ford for the standard stomping and choking package. We’re clipped to Sabian dropping Riho into a camel clutch so Omega can come in for the save. Omega stomps away on her so Ford comes back in to punch Riho in the stomach for two. Riho kicks her down and headscissors Sabian, allowing another hot tag to Omega. You Can’t Escape gets two and Riho’s high crossbody is good for the same.

Sabian scores with an enziguri to Omega and Ford is back in for the handspring elbow. We’re clipped again to Ford hitting a Codebreaker and Sabian adding a legdrop to the back of the head to give her two. Omega finally hits a V Trigger on Sabian and the women come in again, this time with Ford hitting a Stunner for another near fall. Riho misses her top rope double stomp and it’s back to Omega for the slugout and Snapdragon on Sabian. Ford hits Omega low though, leaving Riho to Snapdragon Sabian as well. Omega Snapdragons Ford to even it up and the One Winged Angel finishes Sabian at 16:49.

Post match Omega talks about how wrestlers like him are told to stay in their place but this was the beauty of pro wrestling. Now they’re running international TV from a cruise ship and we get some applause for everyone involved. Goodnight and goodbye.

There is no update on Awesome Kong.

It’s another mystery partner and this time that would be….Colin Delaney, with Tully Blanchard thinking he looks good on paper. Orange Cassidy and Tully are here of course. Spears flips Cassidy off to start but gets hammerlocked by Trent for his efforts. That’s escaped but Spears cuts himself off from the TEN.

Some chops have Spears wincing and Trent knees him in the chest to send him outside. Delaney (who was the loser jobber in ECW about ten years ago) comes in and armdrags Chuck into an armbar. They flip around a bit into a standoff so Spears comes in at the same time, allowing Chuck to beat them both up. The ring is cleared but Delaney and Spears break up the big hug. Delaney wants his own hug but Spears goes to hug Tully instead.

Back in and Spears gets in an argument with the referee over a count before Delaney grabs a chinlock on Chuck. That’s broken up and it’s Trent coming back in to chop away. A hard clothesline drops Delaney and a running flip dive takes him down as well. Things settle back down and Trent slips out of a double suplex and brings Chuck back in. Soul Food into a half and half suplex gets two on Delaney but Spears crotches Trent on top.

Delaney hits a top rope Stunner into Spears’ Death Valley Driver for two with Chuck making the save. Everything breaks down again so let’s get the Cassidy vs. Blanchard showdown. All four hands go into the pockets and Cassidy does the kicks to the legs but Spears jumps him from behind to break that up. Trent sends Delaney into Spears and it’s a running knee to set up the big hug. That’s enough for Tully and Spears who walk out, leaving Delaney to take Strong Zero for the pin at 15:03.

Delaney and the other three have a group hug.

Breaking All The Rules? Update On Angel Garza's Future On Monday Night Raw And NXT