If you would like to see this show in full, you can see it right here for free: 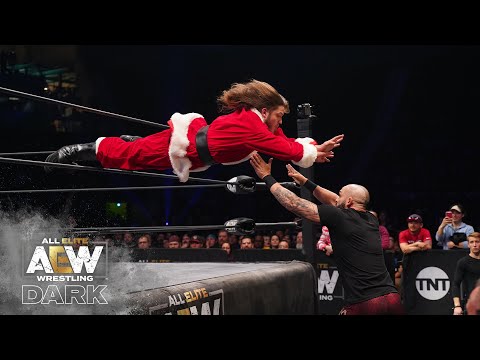 
It’s the final Dark of the year and since there is no Dynamite tomorrow, I’m not sure what to expect from this one. That makes things a little more interesting, though there is a good chance that it is going to be a normal show. Your individual taste on that may vary, but having a show on Christmas Eve might not be the brightest idea in the world. Let’s get to it.

Tony and Dasha give us the usual welcome, albeit with more Christmas references than you get in most weeks.

Sammy is already filming during the entrances so the holiday isn’t messing with his routine. We hit the posing in the corner before Sammy rolls away and dances a bit. A dropkick puts Cutler down and Sammy spins into a pose, followed by the headlock for a bonus. Cutler is right back with a dropkick into the corner and a pose of his own, setting up a suplex to the floor. A big flip dive to the floor drops Guevara, who is right back up with a corkscrew dive.

Cutler is back up as well with a suicide dive and some right hands, only to have Sammy hit a top rope double stomp to the chest onto the apron. Hold on though as Sammy needs to yell at the fans on the mic before getting two. That’s a rather Guevara move to make and it fit him very well. Sammy goes up, points at Cutler, and then drops down for a chinlock instead. Cutler is back with a kick to the head and a Phenomenal Forearm gets two.

Another kick to the head rocks Cutler this time though and a springboard cutter plants him as well. The shooting star press connects but Sammy barely covers, allowing Cutler to roll him up for two in a great false finish. That’s enough for Sammy, who hits something like a reverse GTS for the pin at 7:48.

Tonight, Joey Janela is yelling TIMBER to end Shawn Spears once and for all. He’s the man you won’t forget.

Hybrid 2 vs. Private Party vs. Santana/Ortiz vs. Best Friends

Or Best & Friends as the pre-match graphic says. Quen and Santana start things off with some grappling until Santana can’t sweep the leg. Evans tags himself in and flips a lot and Trent joins him, only to get headlocked over. That’s broken up and Trent counters a flip into a bridging northern lights suplex for two. The Friends hit stereo fall away slams on the Hybrid and everything breaks down.

The Hybrid 2 and Santana/Ortiz are backdropped over the corners but they pull the other four outside. Back in and Evans hammers away at Chuck, only to charge into a boot in the corner. Kassidy comes in for the screaming right hands but it’s Santana coming in and allowing a blind tag to Ortiz for a springboard crossbody. Santana hits two Amigos but hands Kassidy off to Ortiz for the delayed third.

A little too much stalling lets Kassidy hit a springboard Downward Spiral but it’s Angelico coming in to slug it out with Ortiz. Santana gets suplexed into Angelico in the corner and Trent comes in to beat up Ortiz some more. The running knee drops Evans and it’s ladder time…with Orange Cassidy laying on the ladder.

Santana and Ortiz aren’t sure what to do but it’s the Best Friends hugging in the ring to break that up. The Friends hit stereo flip dives to take everyone out and it’s Cassidy hitting a dive onto Santana/Ortiz. Back in and Silly String drops Trent but Santana counters another attempt. The referee gets distracted and it’s the loaded sock to Cassidy. The Street Sweeper finishes Kassidy to give Santana the pin at 16:04.

Here’s Pac, who brings out Michael Nakazawa (with commentary saying that this is taped after Dynamite so no, Pac hasn’t had him captive for six days) to continue the beating. If Kenny Omega doesn’t give him the rubber match, this will continue.

Before the match, Spears is about to tell a kid the truth about Santa Claus…but it’s Janela Claus cutting him off. Spears jumps him from behind though and we start in a hurry. Janela blinds him with the hat so Tully Blanchard has to intervene to help Spears out. A suicide dive takes Spears out but he’s right back up with a spit of water at Janela.

Back in and Spears crotches him on top but Janela keeps rolling away as Spears goes up top over and over. The fans chant TEN so Spears does a cartwheel and flips them off. Janela fights back and they head to the floor with Janela using a chair as a launchpad to knock Spears into the crowd. After a quick cameo from a fan dressed as Jesus, Spears comes back with a spinebuster. Tully gets in the ring and we get some shots of Jesus threatening to beat him up. The distraction lets Janela knock Spears down and drop a top rope elbow for the pin at 7:42.

Post match Janela offers Spears a beer before dropping him with a Stunner.

KB's Review: Resolving To Be A Better Wrestling Fan